From the Borgo to the old flower market 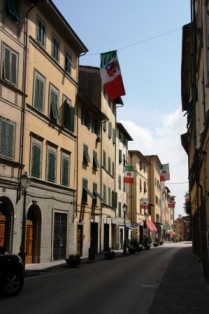 Start off the day with a leisurely stroll around the historic old quarter and
the environs. An action-packed two-hour visits to tour the sights and take a little time out to relax. Where the southern part of piazza grande and the Ruga degli Orlandi meet, the widening street leads you to Borgo della Vittoria, once Borgo San Furello, the starting point of ourccultural stroll at the discovery of the
old quarter. Borgo della Vittoria is a vigorously animated smart part of the town with alively feel. Indeed one of the beating hearts of this great town. You'll find a wide variety of shops and lovely cafés and bars where Pesciatins like to meet friends, and converse on their daily passeggiata. Treat yourself to an espresso
for a truly Italian atmosphere, then explore this exclusive area. Enjoy wandering around.
The palaces are not very elegant, despite a few facades boasting noble armorial bearings.
The town's oldest part, once within the walls, today extends within the stretch going from the square to Via S. Maria where once the gate Porta Lucchese, or Porta Reale, stood. At your right, indulge at the front of Casa Castaldi; look at the beautiful tablet in gothic letters dated 1315 which is all that remains of the ancient gateway built when Pescia still belonged to Lucca. Keep walking, on the right-hand side, you may want to wander the steep country-road uphill to the Torrione, literrally the keep. A short walk is rewarded by fine views! This war architecture belonged to the 15th-century ancient town-walls. The "keep"
stands as the symbol of the town's Rione di S. Michele.

Next, walk Borgo della Vittoria to the end, and then left into Via Domenico Buoncivinni. This wide urban space is Piazza XX Settembre, the Pesciatins' favourite place for festivals and shows in the 1800s. Today there is the bus station where the inter-town buses to Lucca and Florence leave. Tickets must generally
be bought before boarding the bus.
By the river is the seat of the State Archives of Pescia of 1928 which preserves a wide collection of precious documents and noteworthy local documents.
The central room boasts a suggestive balustrade, a wide glass window and interesting eclectic murals. South, at the piazza' furthest end, starts the long tree-lined Viale Garibaldi, Pesciatin's favourite place for their daily passeggiata, enjoy a stroll in a wonder - fully relaxed atmosphere by the river.
At the end of Borgo della Vittoria the tour continues to Piazza Matteotti, the lovely well-tended public gardens with flower-beds and paths, once the nuns' kitchen garden. Have a break, take the weight off your feet and watch Pesciatinswander past.

Continue touring the sights on the left-hand side past the cinema - teatro to the ancient monastery of St. Michael. Walk past the gate and gaze at the interior of the Refettorio delle benedettine, literally Benedictine Refectory. Highlights are its 17th-century stalls and benches, and the abbess's chair at the farthest end of the room with above a grand canvas (1615) representing The Last Supper by Fioravante Sansoni, a local painter, The building is of 1500s, although a few architectural details suggest it goes back to the medieval period. 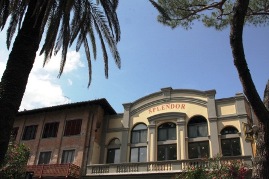 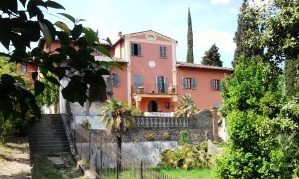 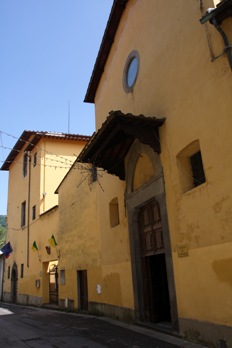 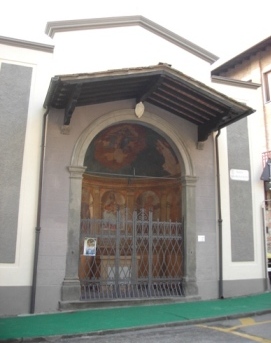 Chroniclers, in fact, mention a Benedictine monastery already in the 11th century. If there is still time, and you feel up to culture, don't miss the beautiful 16th-century oil painting on wood of the Annunciation on the high altar; worth a look are also the 14th-century statue of St. Michael and two paintings: one, representing the archangel Michael's victory over the devil and the other Saint Benedict, both by Alessandro Bardelli, a painter of the Baroque period born in Uzzano in Pescia. Be sure to see also the 18th-century painting by Innocenzio Ansaldi (1734-1816) showing Saint John Nepomucene. Observe how beautifully the old nun's choir above the entrance is lit by numerous openings overlooking the nave, but just admire the superb circular multicoloured stainedglass window of the late 16th-century executed by Gaspero di Lorenzo Ducci.
Leave the church, and get started for a relatively easy steep walk to one of the most fascinating parts of Pescia, the renowned Valchiusa, a small, but attractive valley with plenty of elegant villas. Well worth a short visit is the one which hosted the mentioned Genevan Jean Charles Léonard de Sismondi. Today t is the seat of Carlo Magnani Library. Do take time to explore the saletta dei tondi - the Genevan economist's former bedroom -, and the other rooms on the ground floor, marvellously decorated with 19th-century murals. Return the way you came and turn right into the street bordering the Convento di S. Michele, you'll end up to Piazza Leonardo da Vinci. A glorious early 19th-century palace welcomes you, this is the former residence of the Piacentinis whose story is linked to the poet Giuseppe Giusti's great love for the fascinating
Cecilia Piacentini who inspired him a love lyric All'Amica risanata (To the Healed Friend). Opposite Piacentini-Benedetti's palace is the Paleontologic museum, an important cultural and research centre for archaeology in Valdinievole. 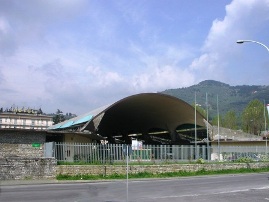 There is one more interesting place to visit before you end this tour. Strolling through via amendola, you get to the square facing the old flower market. If you choose just one sight to see, make sure it this. Built in 1950s with its peculiar vaulted pavillion covering which intentionally reminds a large billowing sail
hovering above the waters, it is acclaimed as the only artistically suggestive building of contemporary art in Pescia. And when you cruise past it, you will surely agree. In 1949 the municipality of Pescia announced an open competition to build a covered square whose function was the one of a flower, fruit and vegetable
market. The winners were a group of architects composed by Leonardo Savioli, Leonardo Ricci, Giuseppe Giorgio Gori, Enzo Gori, and Emilio Brizzi. This architecture, today slightly shabby, still arouses the critics' interest and also won a prize in an internation architecture competition in 1951. 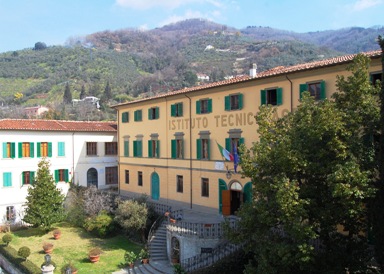 Wander around at your leisure now. If you have still time and energies, stroll as far as the Ponte Europa, a vantage point to admire the hilltop villa of the Della Barbas.